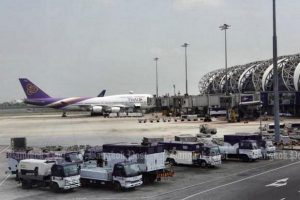 Transport Minister Arkhom Termpittayapaisith said he will ask the Airports of Thailand Plc (AoT) to consider speeding up plans to improve ground safety conditions at Suvarnabhumi airport. Speaking after a meeting with International Air Transport Association (IATA) representatives and Thai aviation officials, Mr Arkhom said the IATA had expressed concerns about the condition of runways and taxiways at the airport.

He said the aviation body recommended the AoT’s scheme to improve ground safety conditions be sped up, when asked for suggestions about airport services.

According to Mr Arkhom, the AoT plans to spend about 2.5 billion baht replacing all 700,000 square metres of asphalt with concrete on all runways and taxiways at Suvarnabhumi airport next year.

Replacing asphalt with concrete is expected to increase the life expectancy of the runways to 10 years and it is part of efforts to permanently resolve the threat of “soft spots” on taxiways, taxi lanes and aircraft stands.

Mr Arkhom said the AoT has adjusted its maintenance schedule but work was slow because it can only be done at night. He said he will urge the AoT management to consider speeding up the work.

The AoT has also been asked to increase the use of technology in airport management especially the biometric system which can reduce costs by 30%, he added.

Commenting on a series of flight delays involving Thai International Airways (THAI), he said he has instructed the airline’s management to investigate and fix the problems before they erode customer confidence.

He said the flight delays were caused by technical issues that could compromise safety.

Asked if the airline’s maintenance standards should be examined or inspected in the wake of technical problems, he said the Civil Aviation Authority of Thailand would make a decision. He refused to comment on rumours that the delays had something to do with the pilot-passenger seating row.

Following the dispute on flight TG971 from Zurich to Bangkok, delays were reported on three flights: TG622 from Bangkok to Osaka on Saturday, TG669 from Guangzhou to Bangkok on Sunday, and TG923 from Frankfurt to Bangkok on Monday.